Skip to content
Back in June, I reviewed Danganronpa: Trigger Happy Havoc ($15.99) which is the first entry...

Back in June, I reviewed Danganronpa: Trigger Happy Havoc ($15.99) which is the first entry in Spike Chunsoft’s beloved Danganronpa franchise. It debuted in the West on PS Vita and was followed by Danganronpa 2: Goodbye Despair ($15.99) in 2014 which was also on PS Vita. Both of these games have been ported since to PC and eventually PS4 before finally arriving on mobile in as Anniversary Editions on both iOS and Android.

If you’ve never heard of this franchise before, the mainline games blend exploration, mini games, puzzles, murders, mystery, and great music together with excellent casts of memorable characters. Over time, Danganronpa has shot well above Ace Attorney and Zero Escape for me which are the pinnacles of the genre for many people. Blending visual novel storytelling, exploration, and various genres of puzzles with investigations together is something no franchise has managed doing like this one. While I love Danganronpa: Trigger Happy Havoc, Danganronpa 2: Goodbye Despair is my favourite of the trilogy and it has been an absolute joy replaying it for the fourth time on iPhone and iPad for review.

The basic game flow here is same as the original game which has a bit of story and character interactions that are followed by a murder mystery segment that leads into adrenaline pumping trials which are full of mini games involving courtroom segments and more. Between trials, you get free time to socialise with the cast or just explore the island. In a lot of ways, the mini games in trials here still feel tacked on to the experience but they never get annoying like they do in Danganronpa V3: Killing Harmony. These trials are followed by a very unique execution event and you should get ready to see the characters you grow and love getting killed off just like in the first game.

I’m not going to get into spoilers for any Danganronpa game but the cast of Danganronpa 2: Goodbye Despair is my favourite with the highlights being Ibuki Mioda and Nagito Komaeda. This game has you playing the role of Hajime Hinata and instead of being set in a school, it takes place on a tropical island and has one of the best opening segments ever. I hope anyone interested in playing this manages to go through the opening without having read any spoilers because it is still amazing six years after I first played through the full game on PS Vita and this game remains top games of all time list. 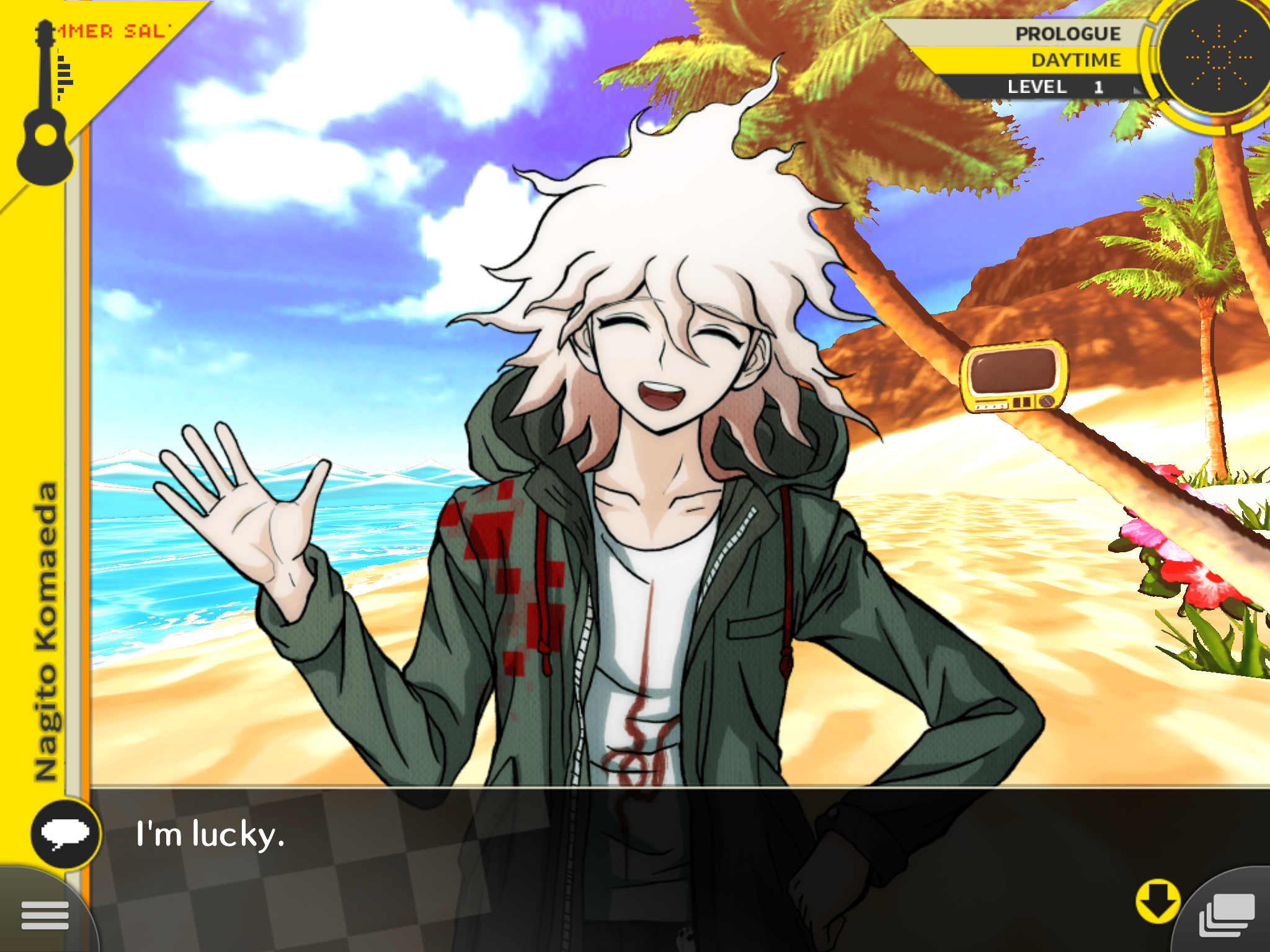 While bringing Danganronpa 2: Goodbye Despair to iOS and Android, the interface has been overhauled for touchscreens. Movement is very smooth on modern devices like my iPhone 11 and the camera feels awful in prior versions of the game compared to the new mobile port. They did a fantastic job making movement and the camera feel responsive and great overall. There are some issues though. The main menu has you tapping an item and then having to tap again at a “GO” button just like the original game. I thought with the experience of porting the first game, some of the small issues there with the interface would be fixed but this release has a few more issues for many modern iPhones.

When you launch the game, this isn’t apparent but the moment you get to the main menu before loading a save, a part of the interface is behind the notch. The only solution is to rotate your phone so the notch is on the right. This is a bigger problem during the free exploration gameplay and dialogue because the speaker’s name is displayed on the left and it is completely hidden away by the notch if you play it with the notch on the left (default). Hopefully this can be fixed in a future update because it is a problem on modern iPhones.

Trials have a lot of back and forth segments where you go through collected evidence and throw it at characters to contradict or agree with what they are presenting in a case. The mini games here play out well and I had no trouble in any of them thanks to the touch controls being responsive all the way. The rhythm mini game might be difficult for some on a touchscreen though.

As with most late ports on mobile or in this case, a late release with additional content, there are a few groups of people who this will appeal to. Those who already played Danganronpa 2: Goodbye Despair before will likely want to replay this classic and there’s no better way than this anniversary edition. Those who played only the original game on another platform would also be better off getting this release over playing the PS Vita or PC version given how much this improves when it comes to the interface and performance. I’ve spent time (mostly on iPhone 11) with this on both iPhone 11 and iPad Air 2.

The improvements to Danganronpa 2: Goodbye Despair on iOS are the same as Danganronpa: Trigger Happy Havoc over the other versions. The Steam version had a performance boost over the PS Vita original but had interface and font issues. The PS4 release that was included in a collection with Danganronpa: Trigger Happy Havoc improved on the PC port but still wasn’t perfect. Danganronpa 2: Goodbye Despair on iOS is the best looking and feeling version of the game assuming you are ok with touch controls. I’m very disappointed that there is still no controller support for this and the original game on iOS.

Danganronpa 2: Goodbye Despair was originally designed for 16:9 displays and there are black bars for any pre-rendered cutscenes and CG elements on both iPhone 11 and iPad Air 2. The in engine gameplay looks excellent with its fullscreen display on both the aforementioned devices. There are a few low resolution textures here and there like the Monobeasts who appear in the beginning but the developers of this port did a solid job in making Danganronpa 2: Goodbye Despair feel and look excellent on iOS.

For performance, I had no issues at all on iPhone 11. Everything was smooth and load times were very fast. Camera movement was also great. It feels perfect on iPhone 11 barring the notch issue. On iPad Air 2, the performance isn’t perfect with multiple instances of frame drops. It isn’t a deal breaker but it is very noticeable compared to the rock solid iPhone 11 experience. Thankfully it does look excellent on iPad Air 2.

In terms of contents, Danganronpa 2: Goodbye Despair on iOS has everything prior versions have including the new extra gallery with images from the artbook for the game. For language support, it includes both English and Japanese voice options like the first game and it has English, Japanese, and Chinese text support.

The lack of controller and iCloud save support for the first game on iOS have still not been addressed and those blemishes are present in Danganronpa 2: Goodbye Despair on iOS as well sadly. This release still has the multitasking or home menu bar visible at all times as well. Despite the 3.9GB download size, you still need to download a bit more in-game after you reach a certain point so keep that in mind. There’s no indication of this on the App Store page or in the menus in-game. Keep that in mind if you plan on playing this without the internet on iOS for an extended period of time.

Overall, Danganronpa 2: Goodbye Despair is a must play on iOS with a few caveats right now. The game itself is superlative but the port leaves some things to be desired. Hopefully the notch issues can be resolved in an update because as of now, you will have to play with the notch on the right so you don’t miss out parts of the interface. The lack of cloud saves remains annoying as well. Just like the first game, Danganronpa 2: Goodbye Despair Anniversary Edition is the one I will recommend to new players looking at which platform has the best version of Danganronpa 2 to play right now despite its issues as an iOS port. With both the original Danganronpa games now on iOS, I can’t wait to see how the final mainline game feels on iOS when it arrives later this year. 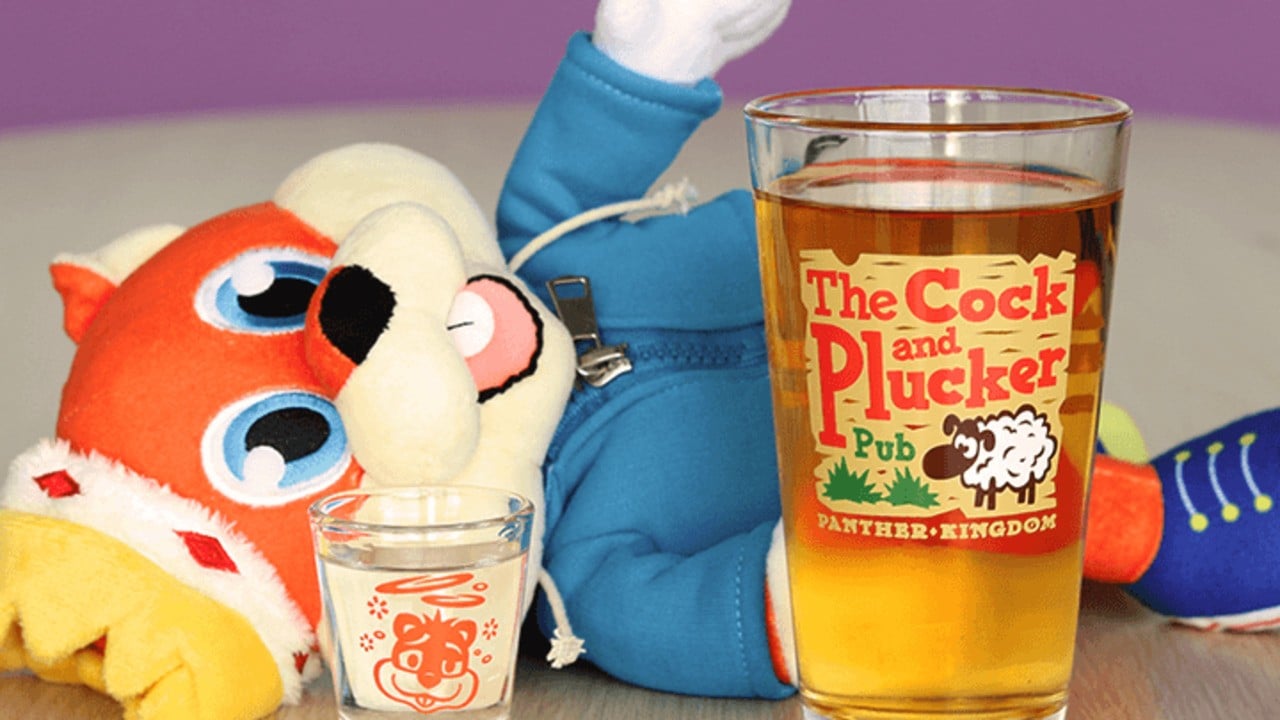